I AM SARTANA, YOUR ANGEL OF DEATH 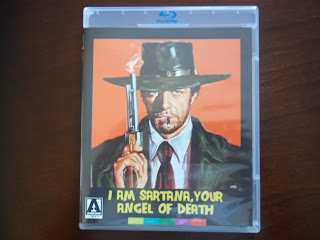 The second film in the Sartana Blu-ray box set from Arrow is I AM SARTANA, YOUR ANGEL OF DEATH (1969). Gianni Garko returns as the title character, and the director is Giuliano Carnimeo, using the pseudonym "Anthony Ascott". Carnimeo would go on to helm the rest of the official Sartana series.

The movie opens with a spectacular bank robbery, and a character dressed like Sartana is leading the assault. The real Sartana is blamed, and a large bounty is offered for him. Sartana decides to track down the culprits themselves to clear his name, and the result is another convoluted plot in which several people seem to have knowledge of.

Giuliano Carnimeo and his cinematographer Giovanni Bergamini give this entry a bit more pizazz from a visual sense--there's plenty of zoom-ins, tilted camera angels, etc. This movie is also more playful than the first one (this attitude would grow as the series progressed). Sartana has a sidekick here in the character of Buddy Ben, played by Spaghetti Western veteran Frank Wolff. The scruffy Ben is reminiscent of Eli Wallach's Tuco in that even though he's supposedly helping Sartana, you never know what the character has up his sleeve.

Klaus Kinski returns again, this time in a bigger and better role as a bounty hunter trying to collect on the reward for Sartana. Kinski's character is referred to in the English soundtrack as "Hot Head". What makes the character stand out here is that he's so bad at gambling he has to collect bounties to pay off his debts. Whenever Hot Head shows up, he's given a musical cue that sounds like "Santa Claus Is Coming To Town"--I wonder if this is in reference to his lousy gambling habits...in other words, wherever he goes, he's bearing gifts to the other players. Kinski gives the role a Peter Lorre-sad sack kind of quality, and one wishes that the character had his own Spaghetti Western built specifically around him.

Sartana's abilities at sleight-of-hand are more pronounced here, to go along with the more fanciful aspects of the film overall. I felt that the movie was more fun and entertaining that the first film in the series, with plenty of wild action sequences.

Arrow presents I AM SARTANA, YOUR ANGEL OF DEATH in 2.35:1 anamorphic widescreen, and the print is very sharp and colorful. As with all the movies in this set there are Italian and English soundtrack options along with English subtitles. The extras include an audio commentary by Spaghetti Western historians C. Courtney Joyner and Henry Parke. The duo give an enthusiastic talk and they obviously enjoy the Sartana series. There are new interviews with actor Sal Borgese and screenwriter Ernesto Gastaldi. Borgese relates a number of anecdotes about his film career (most of them having nothing to do with Sartana). Gastaldi's talk mainly has to do with the subject of Spaghetti Westerns in general. There's an extensive stills gallery and the disc cover sleeve has reversible artwork.