The latest issue of Richard Klemensen's magnificent LITTLE SHOPPE OF HORRORS is available, and it continues the high standards the magazine has maintained for over forty years. LSOH is the ultimate resource when it comes to everything about Hammer Films.

LSOH #40 has an amazing fold-out cover from artist Mark Maddox, which showcases QUATERMASS AND THE PIT. 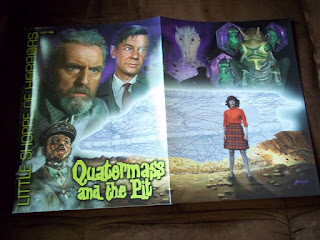 QUATERMASS AND THE PIT is the Hammer film that gets the main coverage in this issue, and it is extensively detailed and analysed by writer Bruce Hallenbeck. QUATERMASS AND THE PIT not only is one of the best Hammer films ever made, it is also one of the best science-fiction movies ever made, and every aspect of the production is touched upon. There are also interviews with Rudolph Cartier, the man who directed the Quatermass TV miniseries for the BBC, and director John Carpenter, who reveals how much the Quatermass stories have influenced his own film work.

The other Hammer film which is featured in this issue is NEVER TAKE SWEETS FROM A STRANGER, a chilling drama about child molestation. Constantine Nasr's article on the production examines its problems with the censors and the its controversial reputation. (I wrote a blog post on the film in June 2016.)

Denis Meikle contributes a fascinating look at the real genesis of Hammer Films, and there is a tribute to actress Marie Devereux. As usual with every issue of LSOH, there's impressive and atmospheric artwork throughout the pages, from the likes of Neil Vokes.

It wasn't that long ago that Richard Klemensen was musing about putting an end to LSOH. I honestly don't see how he can--the magazine seems to get better and better. The articles I've mentioned above are some of the best in LSOH history.

There's not too many monster movie magazines left, and the ones that are still around basically try to copy the old FAMOUS MONSTERS OF FILMLAND. The result is the issues are filled with the same generic stills and the same generic stories about movies that have been covered to death. What I most appreciate about LITTLE SHOPPE OF HORRORS is that every issue goes out of its way to be fresh and informative, bringing new insights into the history of English Gothic cinema.
Posted by Dan Day, Jr. at 9:18 AM