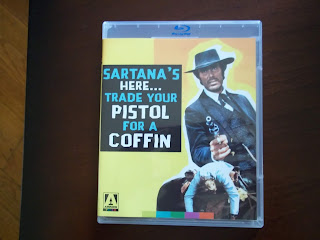 The third entry in the Arrow Sartana Blu-ray box set is the the 1970 film SARTANA'S HERE...TRADE YOUR PISTOL FOR A COFFIN. Uruguayan actor George Hilton plays Sartana in this one instead of Gianni Garko.

This movie is even wilder than the preceding titles in the series, with a number of action gags that will either make you laugh or shake your head in disbelief. The story starts with Sartana observing an attempted robbery of a gold shipment (a well-staged sequence, by the way). The robbery is just one of many that have been happening, and of course nearly everyone in the local community seems to be in on the plot. Sartana starts his own investigation, but this time he has to deal with another mysterious gunslinger--a peculiarly refined fellow who dresses in white and is fond of quoting Tennyson. In the English dub the character is called "Sabbath", but in the Italian dub he's called "Sabata"--despite the fact that he has nothing in common with the man of that name played by Lee Van Cleef in other movies. (Confused? Well, that's Spaghetti Western history for you.)

American actor Charles Southwood (believe it or not, that's his actual name) plays Sabbath/Sabata, and Erika Blanc plays a shifty saloon owner. Both performers worked for Mario Bava in their movie careers. Blanc brings some glamour to the story, and Southwood does make an impression (albeit a strange one).

Giuliano Carnimeo directs once again, and he and cinematographer Stelvio Massi go all out in the use of zoom-ins and tilted camera angles...so much so, one wonders if Jess Franco was involved. It does give the story a certain oomph, though. And you have to love a film which has this line of dialogue: "Raise your hands, and move away from the loaf of bread."

This movie is in 2.35:1 widescreen, and the print looks excellent. A new interview with George Hilton is included, and he discusses his one Sartana film and reveals that he and Gianni Garko are actually good friends. Erika Blanc is also interviewed, and she talks about her career in the Italian film industry. She also reveals that she was pregnant during the filming of SARTANA'S HERE...TRADE YOUR PISTOL FOR A COFFIN. Actor Tony Astin is also interviewed, and there is a stills gallery.

SARTANA'S HERE...TRADE YOUR PISTOL FOR A COFFIN is definitely the zaniest film of the series that I have seen thus far. It is very entertaining, as long as you don't try to compare it to a traditional Western.
Posted by Dan Day, Jr. at 12:58 PM