LIGHT THE FUSE...SARTANA IS COMING 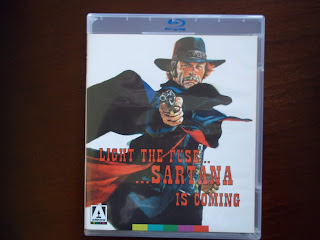 LIGHT THE FUSE...SARTANA IS COMING is considered the last "official" Sartana movie. (The Sartana name was used in several other Euro Westerns, but I honestly don't know why those movies are not included among the "official" series.) This 1970 entry is also the final film I watched from the Sartana Blu-ray box set from Arrow Video.

Gianni Garko returns as Sartana, and this time takes it upon himself to spring an old acquaintance from a brutal territorial prison. The reason why? Sartana's old buddy was involved in a shady transaction dealing with half a million dollars worth of gold and two million dollars worth of fake currency. (One would think after all the gold hordes Sartana has gotten his hands on in the earlier movies, he wouldn't need to go after any more treasure.) As usual, every other character in the film has some knowledge of the loot, or wants it for themselves--but, also as usual, Sartana is always a couple steps ahead of everyone else.

This entry is a bit harder edged than the earlier films--one character has acid poured on him, and another is whipped. But there's still a number of cartoonish elements on hand, such as Sartana's choice of special weapons. The gunslinger uses a wind-up toy, and a pipe organ which is fitted out to fire off like a cannon and a machine gun (Holy Nancy Faust!). Sartana wipes out plenty of desperadoes with these gimmicks, and he also takes out plenty of foes in more traditional ways as well.

The story is graced by the appearance by another gorgeous Euro Cult actress: Nieves Navarro, who has a small but pivotal role as a widow involved in the treasure hunt. Bruno Nicolai contributes a fine eclectic music score.

The extras on this disc include interviews with Gianni Garko and the series' main director, Giuliano Carnimeo. There are also interviews with actor/stuntman Sal Borgese and screenwriter Ernesto Gastaldi, but the two of them barely mention the Sartana films during their talks.

I knew basically nothing about the Sartana films before I bought this box set, and now that I have gone through all five discs in it I have to say it is a worthy purchase, especially if you enjoy Spaghetti Westerns. These movies are not on the level of the greatest Euro Westerns, but they are entertaining to watch, and Gianni Garko has major screen presence when he's dressed in Sartana's black suit and black cloak. All five films in the set look and sound fantastic, and that certainly makes a difference. Arrow Video is a company that consistently puts out outstanding home video product.
Posted by Dan Day, Jr. at 11:51 AM