HAVE A GOOD FUNERAL MY FRIEND...SARTANA WILL PAY 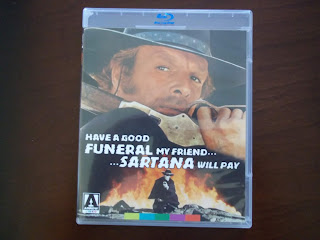 My journey through the Arrow Sartana Blu-ray box set continues with the fourth entry in the "official" series, HAVE A GOOD FUNERAL MY FRIEND...SARTANA WILL PAY. This 1970 movie has Gianni Garko returning in the title role.

The story opens with a gold prospector being ambushed and murdered...but Sartana (who, in typical fashion, appears out of nowhere) shows up and kills the killers. Sartana takes it upon himself to find out why the prospector was murdered and by who. Everyone in the local town is convinced that there must be gold on the murdered man's property, which leads Sartana to become protector to the prospector's beautiful niece. The gunslinger and the niece even seem to be on the verge of a relationship....but, as in every Sartana film, nothing is as it seems, whether it be supposed damsels in distress or expected large amounts of gold.

Out of all the films in this set I have to say that this is the best one overall (I've still got one more movie to watch). It's an entertaining, fast-moving entry, and director Giuliano Carnimeo & cinematographer Stelvio Massi provide much visual flair. Gianni's Sartana seems a bit more serious this time around (maybe that's because of his mustache, which makes him look older here). The story still has some florid aspects to it, particularly in the character of a Chinese gambling house owner played by George Wang who comes off as a James Bond villain type.

It helps that this film gets a large shot of glamour from Daniela Giordano, who plays the niece, and Euro Cult actress Helga Line as a shady saloon gal. The music score by Bruno Nicolai is also in my opinion the best of the series as well.

The print for this film used by Arrow looks and sounds outstanding. There's another audio commentary by Spaghetti Western experts C. Courtney Joyner and Henry Parke, and they also believe this is the best of the series. An interview with actor/stuntman Roberto Dell'Acqua is included, along with the usual stills gallery.