Book Review--RUNGS ON A LADDER: HAMMER FILMS SEEN THROUGH A SOFT GAUZE 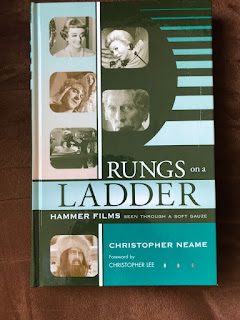 One of my latest discount book purchases is RUNGS ON A LADDER: HAMMER FILMS SEEN THROUGH A SOFT GAUZE. This is a short memoir on what it was like to work behind the camera for Hammer Films from the mid-1960s to the early 1970s.

This Neame also wanted to work in the film industry, but he wanted to follow a different path than his father. As a young man Neame found himself working as a clapper boy on Hammer's DRACULA PRINCE OF DARKNESS. He would eventually serve on a number of Hammer productions over the next few years, eventually rising to the status of production manager.

At first Neame was taken aback by Hammer's meager budgets and lack of resources (his father was connected to some of the leading lights of the British film business). He soon learned to appreciate the ingenuity and think-on-your-feet creativity that flourished at Hammer. Neame became fond of working for the company, and he looked forward to whatever Hammer title he became attached to.

Neame got to work alongside and personally know such famed genre names as Anthony Hinds, Terence Fisher, Peter Cushing, Jimmy Sangster, and Anthony Nelson Keys. He also experienced the beginning of the company's downfall in the early 1970s. Neame would become a successful producer in his own right, but he looks on his days at Hammer with a sense of appreciation for what he learned there.

Among the highlights are Neame's dealings with Bette Davis during the making of THE ANNIVERSARY, his travails as a second unit director on THE DEVIL RIDES OUT, and the various problems that arose during the filming of BLOOD FROM THE MUMMY'S TOMB.

RUNGS ON A LADDER is not a gossipy, tell-all book. Neame writes of his time at Hammer with affection, even those times in which things did not work out properly (which happened rather often). Most of what Neame details will not be major revelations to Hammer fans (Peter Cushing was a joy to work with, Andre Morell could be irritable, Terence Fisher was kindly and affable, etc.).

The book is written in a very clear, easy-to-read style. One does not have to be a film expert or have a knowledge of cinema technique to enjoy it. There is a small photo section, but most of the pictures will be quite familiar to major Hammer fans (some of the photo captions are in error). There is a very short foreword by Christopher Lee.

If the book has a fault, it is that it's too short. It is only 130 pages, and it is a quick and easy read. One wishes that Neame had given more detail on certain subjects. (The author barely covers his work on FRANKENSTEIN AND THE MONSTER FROM HELL.)

RUNGS ON A LADDER is a decent book, and it will certainly be enjoyed by Hammer fanatics, but it is also a very small and slim volume. I'm glad I got it at a discount, because the book was published by Scarecrow Press, and their original list prices are quite expensive. I wouldn't say that RUNGS ON A LADDER is essential Hammer reading, but it is nice to have if you can get it at a low price.