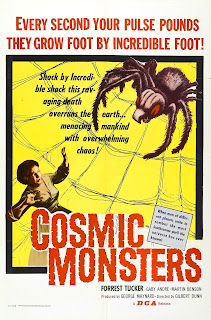 American character actor Forrest Tucker starred in three different science-fiction movies made in England that were released in 1957-58. The U.S. titles of the films are THE ABOMINABLE SNOWMAN OF THE HIMALAYAS, THE CRAWLING EYE, and THE COSMIC MONSTER. Out of the three, THE COSMIC MONSTER is the lesser one. I watched it for the very first time yesterday.

Like the other two films in the Transatlantic Tucker Trio, THE COSMIC MONSTER was based on a British TV miniseries. The English title of this movie was THE STRANGE WORLD OF PLANET X, and for some reason most American posters and ads for it have COSMIC MONSTERS as the title.

Somewhere in England, near a small village, a determined scientist named Dr. Laird (Alec Mango) is attempting to change the molecular structure of metals with the use of powerful magnetic fields. Gil Graham (Forrest Tucker), who is assisting Laird, is worried about the danger of these experiments--one of them has injured another assistant. The British government, which is funding Laird's work, is concerned as well. Laird winds up damaging the Earth's atmosphere, allowing powerful cosmic rays to seep through. These rays have a powerful impact on the insects in the woods near Laird's facility, causing them to mutate into monstrous creatures. Graham and the authorities try to correct the situation, with the help of a mysterious stranger named "Smith" (Martin Benson).

THE COSMIC MONSTER has an intriguing premise, and for most of the story has a Quatermass-type feel to it, with discussions concerning scientific ethics and responsibility. Unfortunately the ending brings down the rest of the film, with the mutated insects displayed through numerous giant close-ups that feel like they come from a nature documentary. These "effects" are poorly integrated with the actors, and we see far too much of this footage, diluting its impact. There's also an appearance of a spaceship during the climax, which, in all honesty, resembles a child's toy.

Before one gets to the climax, there's a lot of talk. Forrest Tucker acquits himself well (even though it's a bit strange to see him wearing a white lab coat and glasses). Tucker underplays the character, and he even gets a chance at romance with Dr. Laird's new assistant, a French computer expert named Michele (Gaby Andre). As expected, Andre winds up being menaced by the cosmic monsters. Her performance suffers due to her being dubbed by another actress. Alec Mango is quietly intense as Laird, but one wonders if a more emotional actor in the role might have given the character more flair. Martin Benson winds up making the most impact due to his Klaatu-like role.

THE COSMIC MONSTER was directed by a man named Gilbert Gunn, who I know nothing about. Gunn tries to inject some suspense through scenes set in the dark woods around Laird's laboratory. There's a subplot about a tramp being affected by the cosmic rays, and becoming a madman who attacks people in the wooded area. This is far better handled than the giant insects climax.

THE COSMIC MONSTER isn't terrible, but it needed a longer running time--and a much bigger budget--to adequately present the ideas and events depicted in the finished film.