It's football season....well, it's supposed to be football season, but, I'm not going to get into that. But I will get into a 1969 film about a fictional football player--NUMBER ONE, starring Charlton Heston.

Heston is Ron "Cat" Catlan", quarterback for the NFL's New Orleans Saints. As the story begins, Catlan is 40 years old, and way past his prime. Even though he has led the Saints to a championship, Catlan is in danger of being replaced by a hot young QB prospect. His status isn't helped when he suffers a knee injury during the last game of the exhibition season. In the time up to the beginning of the regular season, Catlan starts to think that maybe he should hang it up. But he's still a prideful man, and a bit unwilling to admit that he's not as good as he once was. He's also unsure about what he should do for the rest of his life, and he has a strained relationship with his wife.

NUMBER ONE was filmed with the assistance of the NFL, and the production attached itself to the real New Orleans Saints football team during its 1968 season. It's surprising that the league did help out with the film, because the story does not make pro football very enticing. "Cat" Catlan isn't a clean cut sports hero. He's a cynical man, who's a bit arrogant, and he cheats on his wife and argues with his coaches. Catlan is used to being "Number One", but now he's unsure of everything around him, and he doesn't know how to deal with his changing situation. There's absolutely no way the NFL would assist in a movie like this today. (In one scene, Catlan argues with his wife, they start to fight, and he pins her down and begins to forcefully kiss her--can you imagine the reactions that would get now, with all the domestic abuse allegations against pro athletes??)

Charlton Heston is excellent as Catlan. This isn't one of Heston's larger-than-life characters--this is a man who used to be larger than life. Most of the men Heston played had a determined stubbornness, and Catlan exudes this in spades. Heston was 45 when he made this film, yet I still thought he was believable enough as an aging pro football player. Some have criticized Heston for his lack of QB skills, but NUMBER ONE is more of a character study than a sports showcase--the major action is off the field, not on. Heston actually had very few in-game football scenes--his character wears the number 17 on his uniform, the same as real-life Saints QB Billy Kilmer. This was so real game footage of Kilmer could be used in the film, to substitute for Heston. 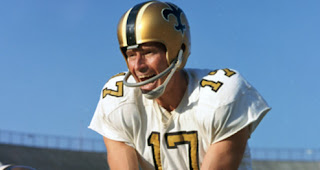 
Heston gets nice support from Jessica Walter as Catlan's wife. Instead of being a "little woman at home" type, Walter's character is a successful fashion designer who has her own identity away from her husband. Diana Muldaur is very enticing as the woman Catlan has an affair with, and Bruce Dern plays one of Catlan's best friends, a former Saints wide receiver who got out of the game early and now runs a major car-leasing business. (Dern tries to convince Heston to join him in this endeavor). John Randolph is the Saints head coach, a man who appreciates what Catlan has done for him, yet also knows that his job isn't to be sentimental, it is to win.

NUMBER ONE was directed by Tom Gries, who had already guided Heston through one of the actor's best performances in the Western WILL PENNY. Gries makes use of the famed New Orleans nightlife (legendary musician Al Hirt gets a showy cameo), but his best contribution to the film is showing the day-to-day grind of an NFL football team. (Ed Sabol and NFL Films were responsible for most of the on-field action and in-game experience.) A few times throughout the movie, split-screen techniques and slow-motion sequences are used, but these are not overly relied on.

As a big-time sports fan, I've always had a rather jaundiced view of most sports films. They are usually about as realistic as a video game, and way too many of them go far over the top in an effort to be "inspirational". NUMBER ONE has a low-key, gritty tone to it. One does have to take into account the fact that it was made 50 years ago. The NFL was getting big then, but it was nowhere near at the heights it would eventually reach. If the story of Ron Catlan would be told today, he'd be a lot more well-off financially, so much so he wouldn't have to worry about having to do any real work the rest of his life. And if he did want to get a job, he'd easily find one as a TV sports commentator.

NUMBER ONE is still a great time capsule on what the world's most powerful professional sports league was like decades ago. It also has a very surprising--and very ambiguous--ending....there's no feel-good victorious moment at the end. You don't need to be a football fan, or even a sports fan, to watch NUMBER ONE. Fans of Charlton Heston will appreciate seeing him play an all too human being.
Posted by Dan Day, Jr. at 10:24 AM