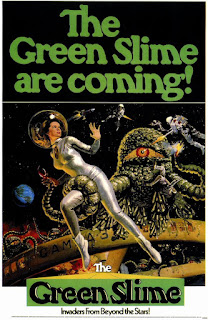 In the mid 1960s, a quartet of Italian science-fiction films were made concerning the adventures of a futuristic space station called Gamma One. The films were directed by the legendary Antonio Margheriti (aka Anthony M. Dawson). The Gamma One movies are colorful, wild sci-fi adventures, with plenty of aliens, ray guns, and explosions. Producers Ivan Reiner and Walter Manley had worked on the English-language versions of the Gamma One films, and in 1968 they mounted another science-fiction action adventure, this time to be made in Japan with a non-Japanese cast. This story takes place on Gamma Three, and the result was the notorious THE GREEN SLIME.

Instead of working with Japan's Toho or Daiei studios, who were quite familiar with science-fiction storylines and effects, the Toei company was chosen to handle the production. The director of THE GREEN SLIME was Kinji Fukasaku, who would later go on the make the highly influential BATTLE ROYALE. The stars of the film were Robert Horton (WAGON TRAIN), Richard Jaeckel (THE DIRTY DOZEN), and Luciana Paluzzi (THUNDERBALL).

Sometime in the future, a humongous asteroid given the name "Flora" (are asteroids named like hurricanes??) is on a course to ram straight into the Earth. No-nonsense Commander Jack Rankin (Robert Horton) is sent to the space station Gamma Three to lead a team to land on the asteroid and blow it up. Gamma Three's commander is Vince Elliott (Richard Jaeckel). Rankin and Elliott served together before, and they were once the best of friends--but they grew apart due to different leadership styles and their shared interest in Gamma Three's sultry doctor, Lisa Benson (Luciana Paluzzi). When Rankin and his team (which includes Elliott) land on the asteroid to plant explosives, they discover an eerie green slime that quickly spreads everywhere. The group sets off the explosives, and manages to get back to Gamma Three just in time--but one of the men has brought back a small patch of the slime on his space suit. The energy that is used to decontaminate the suit mutates the slime into a bizarre one-eyed creature with flapping tentacles. The thing feeds on energy, so hitting it with laser blasts only makes it stronger--and its blood starts mutating into other creatures. Soon the station is overrun with them, and Rankin and Elliott have to set aside their differences and find a way to destroy this threat once and for all.

I watched THE GREEN SLIME for the very first time last night, and my first impression was that it reminded me of several other genre outings. The movie could be called a combination of ARMAGEDDON and ALIEN. The various models and gadgets used in the FX sequences look very much like they belong on the THUNDERBIRDS TV show (the early part of THE GREEN SLIME, dealing with the mission to destroy the asteroid, plays out very much like a typical THUNDERBIRDS episode). The rivalry between Rankin and Elliott, and their mutual attraction to Lisa, is a subplot that can be found in several war movies. THE GREEN SLIME has a campy reputation now, but its story structure and elements are still being used in much higher profile productions today.

What makes THE GREEN SLIME particularly notable (and infamous) are the monsters. They are almost impossible to describe, so I've added a picture of them below. The creatures fit the tradition of Japanese kaiju being as outlandish as possible, without having any concern over whether they make any sense. The viewer gets to see far too much of the monsters, and this only exacerbates their rubbery man-in-a-suit aspects. It doesn't help that the creatures move about like a bunch of kids wearing bulky Halloween costumes. One has to wonder how the monsters would have turned out if the THE GREEN SLIME had been made in Italy, like the Gamma One films, since Antonio Margheriti was also a FX artist. 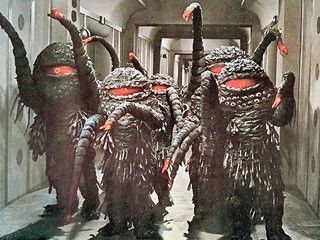 What THE GREEN SLIME turns into

THE GREEN SLIME does feature some determined performances by Robert Horton and Richard Jaeckel. Both actors deserve credit for playing their roles with absolute sincerity. Luciana Paluzzi's doctor isn't just a damsel and distress--she's a capable professional who is an important part of the Gamma Three team. Most of the supporting cast were apparently non-actor Americans who happened to be living in Japan at the time--and it shows. One of the main officers on Gamma Three is played by Robert Dunham, who also appeared in a number of Toho kaiju features. Linda Miller, the leading lady of KING KONG ESCAPES, is also here, but she's basically an extra (one is able to glimpse her briefly in a couple scenes if you look hard enough).

According to Bill Cooke's cover story on THE GREEN SLIME in VIDEO WATCHDOG #162 (which most of the information in this blog post comes from), the Japanese version of the film is significantly different than the English-language one. The Japanese version is much shorter--but it contains scenes that are not in the American cut. (The version I watched on the Xfinity TCM app was the full 90 minute English-language cut.)

I liked THE GREEN SLIME...but one must remember that this is the type of movie that interests me, and that I've spent most of my life watching vintage science fiction and horror films. I can forgive just about anything in older monster movies, except boredom--and no matter what you may think of THE GREEN SLIME, it isn't boring. There's very little filler in it, and if one accepts the premise (and the style of the special effects), it's entertaining. I realize that many will not be able to get over the look and actions of the creatures (or the main title song--yes, I said title song), but THE GREEN SLIME is a rollicking far-out adventure with stalwart heroes and plenty of imaginative elements.