GAMERA: THE COMPLETE COLLECTION On Blu-ray From Arrow Video 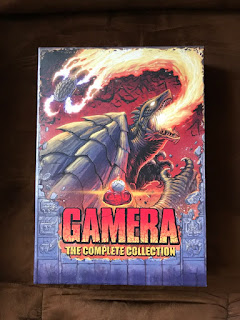 There are box sets, and then there are ultra-special box sets. And then.....there is the Gamera Blu-ray box set from Arrow Video. Calling it gigantic doesn't even cover the scope of this collection...it is as mammoth as the Titanic Terrapin himself.

Before I continue with this post, I have to admit that I've barely scratched the surface of this set. I haven't even watched all the movies in it, yet alone comprehensively delved into the extras. Is it wrong to write a review of it when there's so much of the product I haven't gotten to yet?? Well, if I wait until I've gone through every single extra, every alternate edit, and every commentary...it may be a whole other year. So I'm going to go ahead and write a review now.

First of all, this set contains every single Gamera film ever made. This includes the classic Gamera series, which started in the mid-1960s and ended in the early 1970s. There's also GAMERA SUPER MONSTER, the 1980 "comeback" film which was basically a mashup of the Terrific Turtle's greatest battles. The three Gamera films made during the 1990s--which many consider among the best kaiju movies ever made--are here as well, along with the 2006 reboot, GAMERA THE BRAVE.

That's a total of 12 films in all, spread over eight discs. But...alternate versions of a few of those films are provided as well, including the American theatrical version of the first Gamera film, called GAMMERA THE INVINCIBLE. Some of the alternate versions found on this box set are the original TV edits put together by AIP.

Each film gets a commentary, and a special introduction by kaiju movie expert August Ragone. Each film also has multiple audio tracks, and subtitles. Each disc is chock full of extras, such as image galleries, trailers, and numerous interviews and documentaries.

For those who bought the Arrow Gamera box set (apparently the American version of it is sold out already), there were even more goodies in it than just Blu-ray discs. 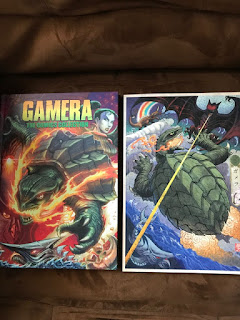 On the left is a 130 page hardcover book containing a reprinting of the 1996 four-issue Gamera comic book series by Dark Horse. On the right is a 80 page book detailing all the films in the set, with an interview of Noriaki Yuasa, the guiding light of the classic Gamera film series, and info on the American versions of the Gamera films (and the numerous American voice dubs for each). 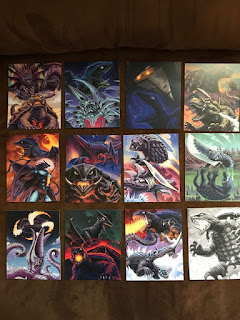 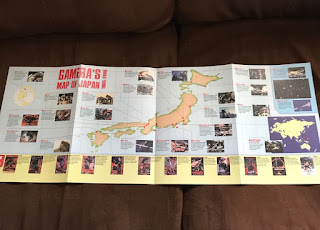 And....there's a fold-out map detailing Gamera's adventures in Japan!! (One side is in English, the other in Japanese)

I've still got a few films in this set to watch, but the ones I have seen all have superlative visual and sound quality. I highly doubt you can find any Gamera film on any other medium which will look as great as they all do here.

This is an amazing set, without doubt one of the greatest home video sets ever produced. The amount of attention and detail put into this is simply stunning. I realize some will be thinking, "All this for a bunch of movies about a giant turtle??" In my opinion Arrow deserves the highest honors for going all out on this set. The Protector of Children has always had to stand in Godzilla's shadow, but the history of the Gamera film series is worthy of attention and analysis, despite the flat-out bizarre nature of most of its entries.

I did not get the Criterion Godzilla box set, because the list of extras was rather sparse, and according to numerous reviews, the visual quality of the films was somewhat lacking. But I did cough up enough hard-earned treasure to get the Arrow Gamera set, mainly because I knew the company wouldn't let buyers down. Trust me, this set wasn't cheap...but it is definitely worth it. (There are plans in the works for Arrow to release a future "regular" edition of the Gamera set.)

Whenever there is a new home video release of any notable science fiction/horror subject, there's sure to be some whining and moaning about it, no matter what the quality of that release may be. I don't see how anyone can complain about the Arrow Gamera set, unless they're ticked off because they didn't get a copy. I'm calling it right now: GAMERA: THE COMPLETE COLLECTION is the 2020 Blu-ray release of the year.