The Dr. Who Films On Blu-ray From Kino 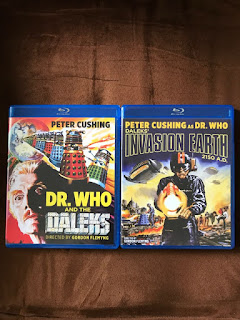 The two Dr. (not Doctor) Who films produced by Amicus in the mid-1960s have now been released on Region A Blu-ray by Kino. DR. WHO AND THE DALEKS and DALEKS: INVASION EARTH 2150 A.D. are available separately.

I've already covered these films in a post I wrote back in August 2017 for a British films blogathon, so I won't go into major details about them here. The movies have a bit of a mixed reputation now, since the big-screen version of the Doctor is quite different from the TV version. There's also Peter Cushing's performance as "Dr." Who, which some fans are not too happy with. Personally, I enjoy these films. They're meant to be old-fashioned adventures for the young at heart, and Cushing's funny old man routine doesn't annoy me the way it does a lot of other people.

The transfers for each film are very sharp, but I must admit that the colors are not as vibrant as I thought they would be (is this due to the films being shot on the Techniscope format?) The sound quality is excellent for movies made in this period.

The extras on the DR. WHO AND THE DALEKS disc include a 1995 program covering the Who movies called DALEKMANIA. This show features interviews with those who worked on the films, including stars Roberta Tovey and Jill Curzon. There's a short talk with Gareth Owen, who gives background detail on the production, and a featurette on the film's restoration.

There's also a brand new audio commentary with Kim Newman, Robert Shearman, and Mark Gatiss. All three men are experts and aficionados of British cult cinema, and they are thoroughly enjoying themselves here. This isn't a serious discussion about the nuts and bolts of the film--it's more like three buddies sitting in a living room and geeking out over a admired topic. It's fun to listen to, especially if you are a Doctor Who fan who knows something about the history of the show. (Unfortunately, the fine commentary with Roberta Tovey, Jennie Linden, and Jonathan Sothcott that was on the Anchor Bay Region 1 DVD release of this movie is not included here.) The original trailer to the film is included as well.

The DALEKS: INVASION EARTH 2150 A.D. disc also has the DALEKMANIA program, along with Gareth Owen talking about this particular film as well. There's a very short talk with actor Bernard Cribbins, a restoration overview, and a original trailer. Kim Newman, Robert Shearman, and Mark Gattis return with another enthusiastic audio commentary.

The Dr. Who movies may not be all that popular among some Cushing fans, but Kino has given each of them very nice presentations on Blu-ray.