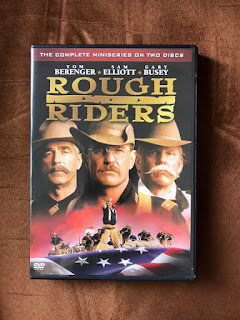 My latest cheap home video acquisition ($5 at Walmart) is a DVD of the 1997 2-part cable TV movie ROUGH RIDERS, co-written and directed by John Milius. The movie dramatizes the events surrounding Theodore Roosevelt's military adventures in the Spanish-American War.

The idea for ROUGH RIDERS came from actor Tom Berenger, who felt that a story about Roosevelt and the Rough Riders would be in the same vein as GETTYSBURG, which he had starred in. Berenger wanted fellow GETTYSBURG actor Stephen Lang to play Roosevelt (Lang declined). John Milius, a huge admirer of TR, became attached to the production, and Berenger took on the lead role.

The movie was made for the Turner Network Television cable channel, and Milius was given a far smaller budget and shooting schedule than he was accustomed to. Despite the difficulties, Milius made a very entertaining tale, filled with the director's usual male bravado and discussions of duty and honor.

The movie was originally shown in two parts on TNT (without commercials it runs about three hours). The first half mostly deals with how the Spanish-American War came about, and Theodore Roosevelt's determination to enter the fray somehow. The creation of the Rough Riders unit (the 1st U.S. Volunteer Cavalry Regiment) is established, and various minor characters and subplots are introduced.

The second half deals with the Rough Riders arriving in Cuba, and their struggles with a disorganized command and a torrid climate. It all leads to a climax at the San Juan Heights, where Roosevelt and his colorful group charge into history.

ROUGH RIDERS is a treat for history buffs, and those who love classic tales of daring adventure. If you want a "warts and all", cynical approach toward the beginnings of American imperialism, you won't find it here (and considering who the director is, you shouldn't expect that). Milius does mention how the yellow press and business interests fanned the flames of anti-Spanish sentiment, but his main interest is how men react to life-and-death circumstances, and what they will risk their lives for.

Tom Berenger is quite good as Theodore Roosevelt, a role that one would automatically think he was not suited for. Berenger makes use of TR's upper-class accent, and at times he has the American icon act like an overeager nerd. The portrayal of TR here is a bit different than in Milius' THE WIND AND THE LION. Berenger's TR is a bit naive and innocently boisterous. Ironically, the actor who played TR in THE WIND AND THE LION, Brian Keith, plays William McKinley in ROUGH RIDERS. How many actors have portrayed two different American Presidents on film, yet alone a President and the one who succeeded him?

The battles for the San Juan Heights are well-handled, although I'm sure John Milius would have wanted more time and money to invest in them. (Nearly all of ROUGH RIDERS was filmed in Texas--obviously the production couldn't have gone to modern Cuba.) What hurts the battles--and the overall look of the film--is that the movie uses the standard 1.33:1 aspect ratio. This is a story that cries out for widescreen.

The only extra on this DVD is an audio commentary with John Milius and executive producer William J. MacDonald. I haven't listened to it yet, and I need to, because the iconoclastic Milius always has something unique to say.

ROUGH RIDERS is a worthy effort, but I must say the story seemed to have been dragged out a bit to fill out a two-night TV slot. Theodore Roosevelt is one of the most fascinating Americans who ever lived, and his actions during the Spanish-American War cover only a very small part of his life. I can't help but feel that ROUGH RIDERS probably wouldn't be made today--or at least the story would be told in a very different manner.
Posted by Dan Day, Jr. at 1:37 PM