Book Review: THE MAKING OF RETURN OF THE JEDI 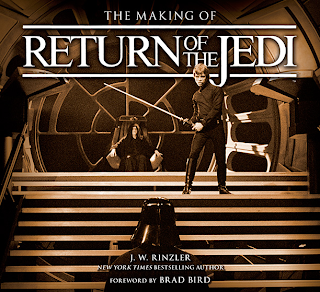 The latest addition to my library is THE MAKING OF RETURN OF THE JEDI, published by Del Rey and written by J. W. Rinzler. It's release is timed to coincide with the 30th anniversary of the film. This follows the pattern of the other books in the series, also written by Rinzler (the one on STAR WARS came out in 2007 and the one on THE EMPIRE STRIKES BACK came out in 2010).

As a lifetime Star Wars geek, I love these books. They are the ultimate guide on the production history of probably the most famous set of films ever made. Like the other volumes, this one is a thorough examination of the movie from start to finish, all the way from George Lucas' earliest script outlines to last-minute changes before the picture's premiere.

Even the most knowledgeable Star Wars fan will learn things from this book. Some of the revelations for ROTJ include George Lucas originally choosing David Lynch to be the film director (I don't think Lucas and Lynch would have worked well together); Lucas wanting to include two Death Stars in the story; and the fact that Ian McDiarmid was NOT the first choice to play the Emperor (the original actor, an older man, became ill and was not able to perform the role).

This is a Lucasfilm product, and Rinzler works for the company, which means that he was able to get access to a massive amount of material. Rinzler did dozens of new interviews with various members of the cast & crew, and also worked in archival interviews as well (to show what people were saying when they were actually working on the film). A lot of people are not big fans of ROTJ, but this book reveals the astounding amount of work and planning that went into the project. The staff at Industrial Light & Magic were hard-pressed to complete the FX work for ROTJ on time (remember, this was before major use of CGI).

Even though this is a Lucasfilm book, Rinzler does not shy away from any controversy or discussion of disagreements among the crew. One of the book's major sub-plots is how the cast & crew dealt with eventual director Richard Marquand. Some of the actors didn't get along with him, and some of the crew felt that Marquand just didn't "get" the Star Wars universe. (In fact George Lucas wound up spending as much time on the set as he did when he directed the first film in the series.)

What really sets this book apart is the exhaustive amount of photos and illustrations in it. You get to see everything from pre-production sketches, storyboards, Ralph McQuarrie concept art, behind-the-scenes stills, and pictures of the ILM effects technicians at work. (And don't worry...there's plenty of shots of Carrie Fisher in the slave girl outfit.) The sheer scope of what went into the making of this film makes you appreciate the final product just a bit more.

This is an expensive book (I got it for $50 on Amazon, just like the one on EMPIRE). You are not going to find this on sale at WalMart or Target. Some may balk at the price, but these books are made for the serious Star Wars fan. Besides, I've known people who have spent a lot more money on Star Wars toys and action figures. With a book like this you don't just put it on a shelf and display it--it is something you can go to again and again. I know the phrase "the perfect holiday gift" gets used way too many times, but in this case it fits.