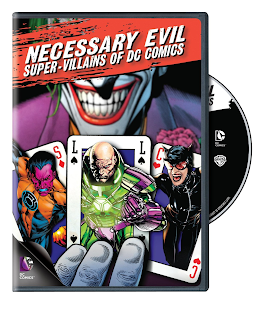 NECESSARY EVIL: SUPER-VILLAINS OF DC COMICS is a new documentary from Warner Home Video focusing on the bad guys of the DC Comics Universe. Why is this being discussed on a movie blog? Well, like it or not, comic book characters are now one of the most popular subjects on which to base a major feature film on.

NECESSARY EVIL plays up to the comics-movie connection in a number of ways. The most obvious one is the choice of narrator--it's none other than one of the greatest living screen legends, the redoubtable Sir Christopher Lee. Whether Mr. Lee has ever opened up a single issue of any DC comic is subject to debate, but he does a very fine job here (then again Lee could read from the phone book and make it interesting).

Among the talking heads featured in the documentary are comic book legends Marv Wolfman, Len Wein, and Neal Adams; actors Clancy Brown, Kevin Conroy, and Michael Shannon; and film directors Guillermo Del Toro, Zach Snyder, and Richard Donner. There are, however, very, very few clips from feature films based on DC product--it's almost as if the company is admitting that their universe has not been represented well in the world of movies.

Most of the clips are actually from the numerous DC/Warners animated series made in the last decade. There's also a lot of stunning artwork displayed. The most famous villains, such as the Joker and Lex Luthor, are discussed extensively but the documentary takes care in not focusing on just a few certain characters (heck, Batman's Rogues Gallery is worthy of a whole feature alone).

NECESSARY EVIL clocks in at a whopping 99 minutes. It would have been very easy for DC and Warners to just slap something together and put it out to serve as a giant commercial, but that's not the case here. There's been some time and effort put into this. Many aspects of comic-book villainy are discussed, without the documentary becoming too pretentious. Even though there are some bits of comic-book mythology included here that some might consider a bit too obscure, NECESSARY EVIL is still accessible to the non-geek audience.

I've said it before, but I'll say it again--the people who are responsible for this documentary, and the people working on the DC/Warners animated product--those are the people that should be making feature films about the DC Universe.

NOTE: I purchased the DVD version of NECESSARY EVIL, which has no extras.