What Ever Happened To Robert De Niro?

I'm sure most of you have seen commercials for a new film called LAST VEGAS, which seems to be an old man's version of THE HANGOVER. LAST VEGAS stars none other than Robert De Niro, an actor extending his streak of appearing in films not worthy of his talent.

I've also recently watched a trailer for a movie about two boxers who fought each other years and years ago, and are now attempting a rematch. One of the boxers is played by Sylvester Stallone--but the guy is not Rocky--and the other is played by.....Robert De Niro. I can't even remember what the name of this movie is....and it's probably just as well.

When I was younger, Robert De Niro only made a couple movies a year, and whenever he did appear on screen, it signified that the production involved was high quality. Before I started to write this blog I went to IMDB and checked some of the titles De Niro has starred in during the last 5 to 10 years. Most of them I don't even have any memory of--do you remember that buddy cop movie De Niro made with Eddie Murphy? No, I don't either.

At one time Robert De Niro was one of the most compelling actors in the world of cinema. He was gifted with the ability to make even the most pathetic characters interesting and watchable. A case in point is the role of Travis Bickle in TAXI DRIVER. Even though it is a brilliant film, TAXI DRIVER is sordid and unpleasant--you feel like taking a shower after you see it. But De Niro is mesmerizing--you keep watching just to see what he's going to do. Same thing with RAGING BULL....De Niro's Jake LaMotta is the type of person you don't want to see walking down the same street you are on, but you are still drawn into his world. 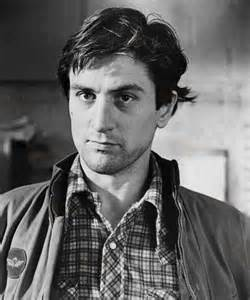 Now De Niro has become a parody of himself, just like William Shatner and Alec Baldwin. He's been reduced to appearing in lame comedies, trading on his "angry guy" persona. I can't honestly think which was the last great movie De Niro did....was it RONIN?

I'm sure one major reason for the turn in De Niro's career is his age (he's now 70 years old!). Maybe it's the fact that the average movie just isn't that good anymore, and it is hard for him to find decent parts. Or maybe he's just decided to take it easy. If a bunch of producers kept offering me acting jobs where all I had to do was make fun of my screen image, and the pay was good, I'd probably do the same thing.

But to me it just seems a big waste. De Niro was a major, major force in the 70s and 80s. There's now an entire generation of film goers who don't even realize that. There's still time left for De Niro to have a chance to create more memorable performances. At least he hasn't wound up in a comic book movie....at least, not yet.


NOTE: I am fully aware that if Mr. De Niro ever reads this, he will come to my house and beat me with a baseball bat.