THE BIG PARADE On Blu-ray 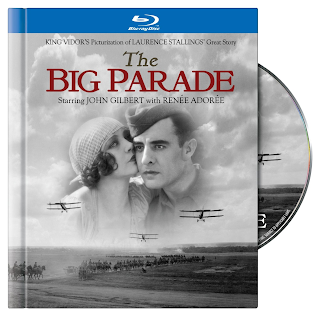 One of the most highly anticipated home video releases of 2013 is THE BIG PARADE, the 1925 MGM silent classic directed by King Vidor.

THE BIG PARADE was the first cinematic epic with a World War I storyline. The film's overwhelming success set the stage for other major productions with a Great War background, such as WHAT PRICE GLORY?, WINGS, and ALL QUIET ON THE WESTERN FRONT. There are some who consider THE BIG PARADE to be the greatest silent film ever made.

The story is very simple--a rich man's son (John Gilbert) is enticed to enlist in the army by all the hoopla surrounding America's 1917 entry into the worldwide conflict. Gilbert becomes friends with two blue-collar recruits (Karl Dane and Tom O'Brien). While stationed in France Gilbert falls in love with a young French girl (Renee Adoree). Gilbert and his buddies seem to be having a good time in the French countryside--until their unit is sent to the front lines, and the reality of war is thrust upon them.

Before purchasing this Blu-ray I had never seen THE BIG PARADE. Upon my first viewing I have to admit I was taken aback by the first half of the film. Most of this part is taken up with a number of light comedic vignettes concerning Gilbert, his buddies, and his French girlfriend. I'm sure a modern viewer seeing this for the first time will wonder (like me) when the war is actually going to show up. The first part of the film is not bad, it's just unusual when compared to most historical war epics.

I think what King Vidor was trying to do was set up the audience--once Gilbert's outfit gets sent to battle, the action never lets up till almost the very end of the movie. The second half has a totally different feel & tone from the first half--kind of if two separate movies were added together.

I've never really been much of a John Gilbert fan. In most of the movies I've seen him in, he comes off to me as cocky and arrogant. And his "ladykiller smile" just creeps me out (but hey, women of the 1920s adored the guy, so what do I know). But he's a lot easier to take in THE BIG PARADE--I personally believe it is his best screen performance (maybe because he doesn't have a mustache here). It would have been very easy for the script to portray Gilbert's character as a spoiled rich kid (I thought for sure that's where the story was going), but instead Gilbert is made out to be a symbol of the ordinary soldier. He goes through the various trails and tribulations just like anyone else. I'm sure King Vidor didn't want Gilbert to be too showy one way or the other so the audience would be able to experience the story through the lead character's eyes.

The visual quality of the Blu-ray version of THE BIG PARADE is simply flawless. It's amazing a movie made in 1925 would be able to look this great. I assume that even the regular DVD version of THE BIG PARADE looks impressive. The score for this particular release is from Carl Davis. If you watch silent movies, or own any on home video, you probably know who Davis is. He's done dozens and dozens of scores for silent films. His music for THE BIG PARADE is, in my opinion, his best work. The music lifts the film to another emotional level, and I couldn't imagine watching THE BIG PARADE without it.

The main extra on THE BIG PARADE Blu-ray is a 64-page book, built into the case, featuring an article written by the premier silent film historian, Kevin Brownlow. Brownlow gives out a number of details about the making of THE BIG PARADE, and numerous facts about director King Vidor. There's also a nice reproduction of the movie's program. (NOTE: The DVD version of THE BIG PARADE does NOT include the 64-page booklet.) Included on the disc is an audio commentary by film historian Jeffrey Vance. It's a good one, with the highlights being actual interview excerpts with King Vidor.

Anyone who gets into silent films will want to add this Blu-ray to their collection. THE BIG PARADE is one of the most famous silent movies of all time. I can't say that I think it's the greatest silent movie of all time, or even the greatest World War One movie (I'll still vote for ALL QUIET ON THE WESTERN FRONT). But it is a truly spectacular piece of film making, and every classic film fan should try to see it.