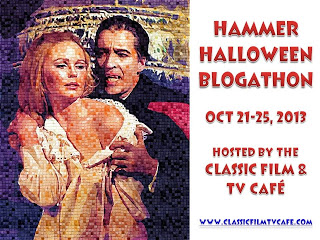 This post is part of the Hammer Halloween Blogathon hosted by the Classic Film & TV Cafe. Go to www.classicfilmtvcafe.com to view the complete blogathon schedule.


When I decided to take part in this Hammer Halloween Blogathon, the first thing I had to decide was....which film to write about? I've got just about every Hammer movie on DVD or Blu-ray, and I've seen them all dozens of times. I came to the conclusion that it would be better to blog about one of the less obvious choices--but one that represents Hammer very well.

THE REPTILE (1966) does not star Peter Cushing or Christopher Lee. It was not directed by Terence Fisher, and the music score was not written by James Bernard. On the surface it would appear that there's nothing noteworthy about this Hammer production. But it stands out as a nice little chiller, and proof that Hammer's house style could work without some of the expected elements.

The movie begins with a pre-credits sequence. A man wanders a darkened manor house, where he is attacked by something springing from the dark. The man dies horribly, with his face darkened and foam on his lips. A mysterious stranger dumps the body in a cemetery. 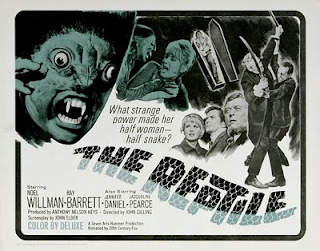 We soon find out that the man is Charles Spalding, and his death is just one of a series that has befallen the village (which is located in Cornwall). Charles' brother Harry (Ray Barrett) has inherited the cottage that Charles was staying in. Harry and his wife Valerie (Jennifer Daniel) intend to live at the cottage. Harry also intends to get to the bottom of his brother's death. He is met with suspicion by the local villagers, and only the friendly pub owner Tom Bailey (Michael Ripper) is willing to help him. Valerie meets neighbor Dr. Franklyn (Noel Willman) and his daughter Anna (Jacqueline Pearce), who live in the manor house that Charles was attacked in. Harry and Valerie have dinner with the Franklyns, and notice their strange behavior. Harry and Tom do some grave digging, and find out that Charles and the village tramp Mad Peter died of snake bite. Harry then receives a note from Anna asking for help, but Harry winds up being attacked just like his brother.

Harry barely survives--but while he is convalescing, his wife also finds a note asking for help. Valerie goes to the manor house, and finds out from a frantic Dr. Franklyn that it is Anna who is responsible for the weird deaths. Years ago, Franklyn, a theologian, was studying various cults in Eastern Asia. He incurred the wrath of a snake cult, and the members turned Anna into a part woman-part snake creature. Franklyn now wants to destroy Anna to end the horror.....

THE REPTILE was made back to back with THE PLAGUE OF THE ZOMBIES, as a way for Hammer to save money. PLAGUE has always gotten more attention than THE REPTILE--it has a more expansive storyline, and a little bit bigger cast. But THE REPTILE is a fine film in it's own right. The unique aspect of the story is the fact that the "normal" married couple carry the film.

Typically in a Hammer film the "regular" characters--the characters who are not monsters, scientists, or law officers--are either dull, dimwitted, or useless. Here Harry and Valerie Spalding are an appealing and believable couple, the type an audience can follow. Ray Barrett is one of the best of the Hammer leading men (admittedly, he doesn't have much competition). As Hammer would move into the 1970s, their male actors would get younger and younger, but not better. We are told that Harry Spalding is a member of the Grenadier Guards, and Barrett definitely gives the impression that he is nobody's fool.

Jennifer Daniel had already appeared in Hammer's KISS OF THE VAMPIRE. In that film she plays almost the same exact role as she did in THE REPTILE--the sensible and loving wife. Even though she was regally beautiful, the blond Daniel never seems to get the same type of fan love that other Hammer Glamour girls get. Daniel is the domesticated Hammer hottie--she's the one you could imagine actually being married to. 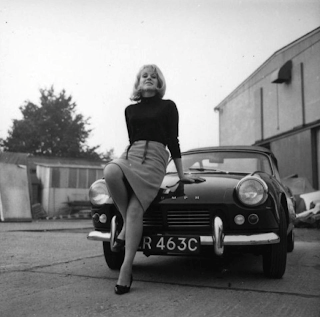 
Another performer who also appeared in KISS OF THE VAMPIRE is Noel Willman, who plays the cold and forbidding Dr. Franklyn. Throughout the movie one suspects that Franklyn is the cause of everything, and in a way he is--but he's also a victim as well. Franklyn's situation has made him the dour person that he is, and Willman gives the part a lot more depth than one would expect. Franklyn is constantly shadowed by his "manservant" (Marne Maitland), This servant is in reality a member of the snake cult that is responsible for transforming Anna, and he acts as a sort of sinister protector for the poor girl. Marne Maitland also has a number of Hammer credits, usually as a foreign menace. Maitland makes a huge impact in THE REPTILE.

The title "character" of the film is played by Jacqueline Pearce. She had just been in PLAGUE OF THE ZOMBIES, and her character in that film has a few things in common with Anna Franklyn. Both characters are "turned" into monsters by someone else's doing, and both of them have a fragile, tragic quality about them, even in their non-creature moments. Pearce's unconventional good looks give Anna an exotic aspect, and in her early scenes she gives Anna a vulnerability that makes Harry and Valerie feel protective toward her. During Harry and Valerie's dinner with the Franklyns, Anna is told by her father to play some music on her sitar--and Anna, encouraged (or controlled?) by the sinister manservant, seems to be sending an accusatory message to Franklyn instead of performing a tune. Franklyn, in a rage, grabs the sitar and smashes it--a strange scene to be sure, but a strong one, and well directed by John Gilling. 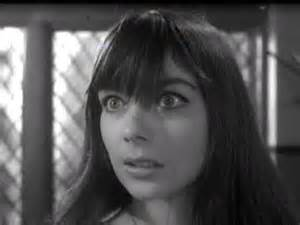 
Anna is also a victim--her dual personality reminds one of Lon Chaney Jr. in THE WOLF MAN. There's also a similarity with another Hammer film which also has a unique female monster--THE GORGON, with Barbara Shelley as an otherwise beautiful woman who happens to turn into a horrible creature. THE GORGON also features a cold and forbidding man (Peter Cushing) who loves and "watches over" the lady/monster. THE REPTILE director John Gilling worked on the script of THE GORGON.

The other major role in the story is filled by the actor who played in more Hammer films than any other--Michael Ripper. It's fitting that Ripper is playing a pub owner--when he does turn up in a Hammer horror, he's almost always found behind a bar or in front of one. What makes Ripper's Tom Bailey special is he is not a caricature or simply comic relief. The audience senses right off that Tom is a good man, the type of person you can rely on. THE REPTILE is a great showcase for Michael Ripper, and it reminds viewers how important Ripper was to the history of Hammer.

At the climax of THE REPTILE, a fire (started in a fight between Franklyn and the servant) is consuming the Franklyn house as the Doctor is telling Valerie the truth about Anna. Franklyn locks Valerie in a room and intends to leave, but Anna, now in her snake-like state, bites and kills him. Anna then tries to attack Valerie, but Harry and Tom arrive just in time to save her. Anna is killed when cold air rushes through some broken windows (I have to say, considering how big the fire is, it's hard to believe the room would have gotten that cold). Harry, Valerie, and Tom watch as the Franklyn house goes up in flames (a common ending in 1960s horror films).

John Gilling directed a number of interesting films for Hammer (including THE PLAGUE OF THE ZOMBIES). Gilling keeps things going at a fast clip (of course, there really isn't much of a plot to slow things down). Various books and articles on Hammer Films have mentioned that Gilling was not an easy man to get along with, but all the actors here do an excellent job. There's no campiness or comic elements in THE REPTILE--like most of the Hammer movies of this period, the story is presented as straight-forward as possible, one of the main reasons why these pictures still hold up today. The late 19th Century Cornish setting is just another version of "Hammerland", that fantasy place where all the men where Victorian clothes, all the women are jaw-droppingly gorgeous, and all the non-important characters can be found at pub.

THE REPTILE was filmed of course at the famed Bray Studios. The exterior of the Franklyn house was actually Oakley Court, not that far away from Bray. Oakley Court was featured in so many fantastic films of the period that it became the Buckingham Palace of British Horror. The fine music score for the film was by Don Banks, and at times it has an Eastern flavor to it.

The one factor of THE REPTILE that some have found disconcerting is the makeup of the creature. For the most part Gilling keeps it in the shadows, but in the last part of the film it is in full view. I personally think that the makeup works, but I do have to say that the longer and longer you look at it the less effective it becomes. It certainly is bizarre enough to work at a quick glance. The makeup was created by Roy Ashton, who did a number of monsters for Hammer. 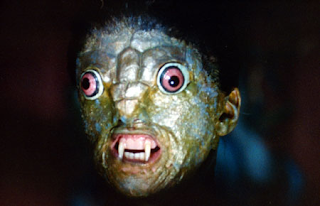 What I appreciate most about THE REPTILE is that it's without doubt a Hammer film, but it's different enough to be worthy of attention. The Hammer style had a lot more flexibility than most people think. Despite the gruesome facial makeups of the snake bite victims, THE REPTILE is not really a gory film. This picture is tame compared to what Hammer would be putting out in the 1970s. Although it doesn't have the reputation of most Hammers, THE REPTILE deserves to be remembered....and discovered by those who have not seen it.
Posted by Dan Day, Jr. at 2:16 AM