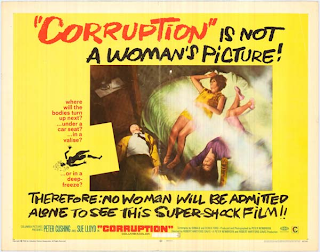 The 1968 horror film CORRUPTION has just come out on Blu-ray from Grindhouse Releasing. This really does fit the true definition of a "horror film"--it's a violent, sleazy thriller, and probably the most controversial movie in Peter Cushing's career.

Cushing plays Sir John Rowan, a renowned surgeon who feels guilty over causing the accident that disfigured the face of his model fiancee Lynn (Sue Lloyd). Sir John's researches lead him to use a pituitary gland from a cadaver and laser surgery to restore Sue's face. The success doesn't last long, though, and Sir John decides that a fresh pituitary gland must be used....which drives him to murder to obtain it.

The plot of CORRUPTION is a staple of cinematic horror--brilliant doctor committing horrible crimes to restore the beauty (or health) of the person he loves. The difference this time is that the film is set in contemporary 1960's England. We've seen Peter Cushing messing around with knives and dead bodies plenty of times--but usually he's in a Gothic never-land, somewhat removed from real violence and consequences. There's nothing artistic, or "cool", about the killings here--they are presented as unpleasantly as possible, and Sir John looks genuinely distressed at having to carry them out (as I'm sure Cushing the actor was).

Because of the film's nasty nature, a number of Peter Cushing fans (like myself) do not have an appreciation for this title. Seeing Cushing perpetrating horrific murders of young women in a "real" setting makes a lot of people uncomfortable. I do have to say, though, that it's not like Cushing the actor didn't ever do horrible things before--and why is it "acceptable" to violently hurt and kill women in a period background?

My problem with CORRUPTION isn't so much the violence, it's the fact that the movie is not very good. Everything in this story is portrayed in an over-the-top style, from the cinematography (which includes a lot of fish-eye lens work), to the acting (all the performers, except for Cushing and Kate O'Mara, ham it up as much as possible), and the terrible jazz-lounge music score. The 1960's setting may have been unique at the time, but it dates the film very badly (unlike Cushing's Hammer Gothics, which remain timeless). The script gets sillier and sillier as it goes along, with such highlights as an unexpected visitor popping in just as Cushing has placed a human head on a kitchen table, and a hippie "gang" whose members seem to have an average age of about 32. Director Robert Hartford-Davis, Producer/Cinematographer Peter Newbrook, and screenwriters Donald and Derek Ford all had backgrounds in British exploitation pictures, and CORRUPTION was obviously designed to attract that type of audience (although having the advertising say "THIS IS NOT A WOMAN'S PICTURE" more than likely chased away 50% of any potential viewers).

The movie really goes off the rails during the climax, which involves a out-of-control laser. I was debating on whether to discuss the ending of CORRUPTION on this blog post. I've decided not to reveal it, because I think CORRUPTION is not as well known as other British horror films. I will say that if you take the ending at face value, it may explain why the film is so loony. But you could also see the ending as nothing more than a cop-out.

There's one other issue I have with CORRUPTION. It's the fact that I think Peter Cushing doesn't fit in this film. He's not bad in it, and it is one of his most striking performances. CORRUPTION shows Cushing in all sorts of ways that you've never seen him before. Unlike his usual steely screen persona, Cushing's Sir John is a man not in control, a man who does not think things through. During the murder scenes Cushing is covered in sweat, and his hair is all over the place. (Note: If you are watching a Peter Cushing movie, and his hair is messed up, things are really, REALLY bad.) Cushing, as always, does his best--but I just don't believe that his Sir John would go as far as he does. This is more the fault of the script than Cushing.

As for the Blu-ray/DVD combo-pack, Grindhouse has done a fantastic job. You get two versions of the movie--the American-British version, and the international version, which features nudity and more gore. It's in the international version where you get to see Peter Cushing holding a knife and wrestling with a topless prostitute on the floor--then proceeding to stab her to death and cut off her head (one of the most mind-boggling and stupefying things I have ever seen).

This Blu-ray/DVD is jam-packed with extras. There's a selection of alternate scenes, and interviews with CORRUPTION actors Billy Murray, Jan Waters, and Wendy Varnals. There's a short audio interview with Peter Cushing, and trailers, TV & radio spots for the movie, and just about every still taken during the production of CORRUPTION. The informative liner notes are written by Allan Bryce, and the notes fold out to form a poster of the more explicit disc-case cover art--although I don't think anyone would want to hang up that type of poster.

The real treat among the extras is the audio commentary by British horror film expert Jonathan Rigby and Peter Cushing biographer David Miller. Both men give the relevant facts and details about the film's production, but they also look at the film from the viewpoint of being Peter Cushing fans. Rigby actually calls CORRUPTION a "unsung classic"--I have major respect for Rigby's opinions when it comes to British horror, but I just can't agree with him this time. The audio commentary is more entertaining than the movie!

The video quality of CORRUPTION is outstanding. The sound is fine, except that the music and effects are a bit louder than the dialogue.

Is CORRUPTION worth buying? If you are a major Peter Cushing fan, yes. If you are a fan of British horror films of this period, CORRUPTION is of some interest. But the movie itself is not very good...it has a sick, sleazy quality to it, and it certainly isn't for young kids. Grindhouse has done an excellent job with this Blu-ray/DVD package, but the appeal of the actual movie is, I think, somewhat limited.