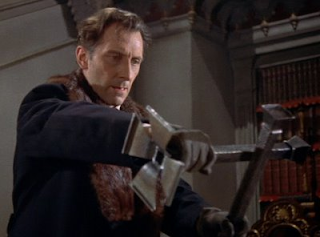 For this Halloween post I've decided to do something a little different. Instead of listing the greatest monsters, what about a list of those that battle the monsters? To qualify, a performer has to have fought monsters in more than one feature film. Surprisingly, there's not very many actors who have done that. I realize that this list is skewed more toward classic cinema, but if I concentrated on modern films, I'd wind up listing people like Brendan Fraser.

I'm not ranking my choices....but I think we can all agree who belongs on top.

THE greatest monster fighter of all time....certainly the greatest vampire hunter of all time, hands down. He also fought the Mummy, the Daleks, the Blood Beast Terror, a race of Abominable Snowmen, the Hound of the Baskervilles, and a couple of werewolves. Faced off against extra-terrestrial enemies in NIGHT OF THE BIG HEAT and HORROR EXPRESS. Dealt with subterranean creatures in AT THE EARTH'S CORE. And don't forget, whenever he played Baron Frankenstein, he usually wound up fighting the very monsters he created.

The greatest American monster fighter of all time. Battled the Creature from the Black Lagoon, and the giant spider of TARANTULA. Faced off against the Mole People and the Brain from Planet Arous. Dealt with the Daughter of Dr. Jekyll and the Invisible Invaders. Encountered a "giant" in ATTACK OF THE PUPPET PEOPLE and an alien intelligence in JOURNEY TO THE SEVENTH PLANET.

Will always be remembered for his iconic role in the original THE THING. Also came up against a giant octopus in IT CAME FROM BENEATH THE SEA and a dinosaur in THE BEAST FROM 20,000 FATHOMS. Tobey was the ultimate example of a monster-fighting military man. Whenever I see him in a movie or a TV show, and he's not wearing a uniform, he looks strange.

The original Dr. Van Helsing. He faced off against Karloff in THE MUMMY and FRANKENSTEIN. The silver screen's classic archetype of a monster fighter.

Yes, Abbott and Costello. They battled Dracula, the Frankenstein Monster, the Wolf Man, Dr. Jekyll & Mr. Hyde, and the Mummy. They dealt with a giant in JACK AND THE BEANSTALK. And they get extra credit for opposing Lionel Atwill in PARDON MY SARONG, Lon Chaney Jr. in HERE COME THE CO-EDS, and Boris Karloff in ABBOTT AND COSTELLO MEET THE KILLER, BORIS KARLOFF. 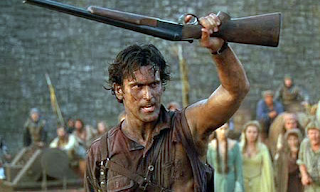 Guys you do NOT want helping you fight a monster: Norman Kerry, David Manners.
Posted by Dan Day, Jr. at 5:42 PM