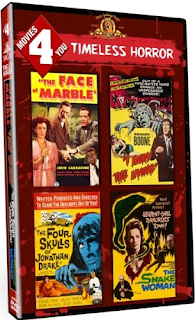 Following up on the Movies 4 You Sci Fi Collections released this summer, MGM and Timeless Media have now come out with a Movies 4 You "Timeless Horror" set. I don't know if I'd call any of the films here timeless....some might call them "time consuming". Just like the Sci Fi sets, I got this from Amazon for $5.

The titles included are:

THE FACE OF MARBLE (1946)
This picture was produced by Poverty Row studio Monogram, and directed by William "One Shot" Beaudine, famous for his many, many low-budget credits. This tale is about another one of those Doctors who want to restore life to the dead, played by John Carradine. It's a typical crazy 1940s Monogram thriller, with a phantom dog, a voodoo-worshiping housemaid, and a stereotypical "scaredy-cat" butler (played by Willie Best). What makes this one unique is that Carradine's Doctor is not mad, or the bad guy....he's the most sympathetic person in the cast!

I BURY THE LIVING (1958)
This is without doubt the best film in this set. It's not really a horror film....it's more of a eerie suspense tale, somewhat reminiscent of "The Twilight Zone". Richard Boone plays a distinguished businessman who is elected to the ceremonial position of director for a local cemetery. At the cemetery office Boone is shown a giant map of the grounds. Each plot on the map has a pin--black for those that have "residents", and white for those that are reserved but not filled. Boone accidentally switches a set of pins.....and those on the waiting list start dying. Soon Boone is convinced that he somehow has the power to send people to their deaths.
This is a creepily effective film, with an engaging storyline. Most of the "action" involves Richard Boone trying not to go insane over the circumstances he is in. Boone was a very underrated actor, who always gave his roles an unusual and unique quality. He's perfect for this part....a more typical leading man wouldn't have made the situation work. Director Albert Band employs numerous off-beat camera set-ups, and he makes great use out of the giant cemetery map--it's almost like a lead character. It's worth buying this set just to see this film.

THE FOUR SKULLS OF JONATHAN DRAKE (1959)
This chiller deals with an ancient curse placed upon a family by a group of South American Indians. It feels very much like a 1940s Universal film, and one of the reasons is that it features acclaimed character actor Henry Daniell. It's a bit more gruesome than usual, what with decapitations and shrunken heads. This is certainly no classic, but the Amazonian curse theme makes it different enough to be of interest.

THE SNAKE WOMAN (1960)
I could find almost no information whatsoever on this film--it's not even listed in Leonard Maltin's Classic Movie Guide. Another one of those experimenting late 19th Century English Doctors has been injecting snake venom into his pregnant wife to cure her insanity. The baby is born cold-blooded and without eyelids, and the local villagers burn the Doctor's house down (something that usually happens at the end of one of these stories). Twenty years later, villagers start turning up dead from snakebite. This movie is set up like a mystery, but it's pretty hard for the story to be mysterious when the title gives the game away. This is a talky, plodding feature, with no style or verve. Director Sidney J. Furie had just made the lackluster DOCTOR BLOOD'S COFFIN, but that film is a masterpiece compared to THE SNAKE WOMAN. Hammer Films would do much better years later with the somewhat similar THE REPTILE.


Just like the other Movies 4 You sets, all four features are on one disc. The video quality is okay, and the only extras are still galleries for each title.