Why Carole Lombard Is My Favorite Actress 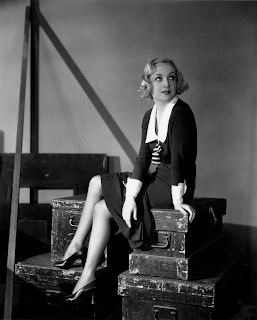 On this day in 1908, in the city of Fort Wayne, Indiana, Jane Alice Peters was born. She later became known as Carole Lombard, one of the most famous and beloved film performers in cinema history.

Carole Lombard is my favorite actress of all time. Explaining why someone or something is your favorite is not an easy process. So many factors come into play, some of them personal, and some which are hard to define. There wasn't one particular exact moment when I became a Carole Lombard fan--it was more over a period of years. Certainly her beauty had a role in my appreciation for her. I'll fully admit that how attracted I am to a certain actress has a lot to do with my overall ranking of that person's talent. I realize that some may find that a bit politically incorrect, but hey, I'm a guy, and that's just the way it is.

Of course there have been literally hundreds of fantastic looking women who've worked in the movies. What made Carole Lombard stand out to me? Well, I've always had a weakness for blondes, but it's much more than that. Carole Lombard, for me, always had a naturalness, a realness, that her contemporaries didn't have. When you watch Carole Lombard in a movie, you feel comfortable with her. Even though she's an extraordinarily beautiful woman, and a movie star, she never seems to act like one. A lot of the famous female stars of cinema's Golden Age--women like Joan Crawford, Bette Davis, and Katharine Hepburn--simply overwhelm you with their respective personas. Let me put it to you this way--you could imagine going to a baseball game with Carole Lombard, while you could never see yourself doing that with the others ladies I mentioned.

It took awhile for Lombard to develop her screen image. One of her early sound roles is in a film called MAN OF THE WORLD (1931), with William Powell. In this one Lombard plays the "nice girl", and she appears to be using a high-class accent. She's totally unlike the Carole Lombard movie fans know (a big reason may have been she was falling in love with Powell at the time). It's as if she's trying to "act" instead of just being Carole Lombard.

It's assumed that TWENTIETH CENTURY was Carole's breakthrough role--the one in which she first acted like "Carole Lombard". That's not really true. There's a couple of other films made earlier in which her natural attitude showed, such as VIRTUE and NO MAN OF HER OWN. Her persona was already there--it just needed to be developed and nurtured with the right scripts, co-stars, and directors.

It's the screwball comedy genre for which Carole Lombard is best known. Whenever Lombard's career is discussed her roles in films like MY MAN GODFREY and NOTHING SACRED get the most attention. In a way I think that's a disservice to Lombard. She many, many films that were not screwball comedies, and while most of them are not famous or critically acclaimed, they show that there was more to Carole Lombard than just a wacky comedienne. Some Carole Lombard fans don't even mention--or even seem to be aware of--her non-comedic work. I think one of Lombard's best performances was as a compassionate British nurse in the drama VIGIL IN THE NIGHT, directed by George Stevens. Lombard is hampered by having to play a truly decent human being....which means she can't yell or scream, or do most "actorly" things one normally does in a more showy role. Yet despite this she's absolutely believable. Her character doesn't come off as too good to be true or annoyingly perfect, and her slight British accent is very well done. Unfortunately VIGIL IN THE NIGHT is a depressing soap opera type of story, and most Carole Lombard fans do not have much to say about it.

There's another group of Carole Lombard fans that are more obsessed with her relationship and marriage to Clark Gable than her acting career. Most Lombard fan sites are so filled with nothing but pictures of the couple, you'd think that's all Carole did. Vincent Paterno's "Carole and Co." blog (http://carole-and-co.livejournal.com/) is an excellent site dedicated to the actress. If I ever write a book about the films of Carole Lombard, I'm not going to spend all my time talking about MY MAN GODFREY, or Clark Gable...which means that book won't sell a lot of copies, if any.

Carol Lombard died tragically in a plane crash in January, 1942. Audiences were never able to see how Lombard would have handled growing older, or whether she would have become a character actress, or if she would have had a downside to her career. Everything that I have read about Lombard mentions how smart and hard-working she was, so I think she would have handled the many changes to Hollywood in the 40s and 50s. Would Lombard have worked in television? I'd like to think she'd have probably produced and starred in her own show, if she chose to venture in that medium.

I honestly don't think I've adequately explained why Carole Lombard is my favorite actress, but then how can you convey why you are drawn to a certain person? I do know that Carole Lombard deserves to be remembered for more than just being "The Screwball Girl", or Mrs. Clark Gable. She remains one of the most celebrated icons of the Golden Age of Hollywood.