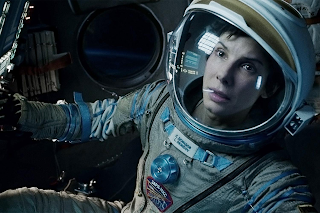 NOTE: I did not watch this movie in 3-D.


When I first saw a trailer for GRAVITY, I was struck by how the credits had a font similar to the one used for 2001's credits. Obviously that was intentional. I thought at the time that attempting to put a new outer space movie in the same league as Stanley Kubrick's classic was not a good idea. Having now seen GRAVITY, I can't say that it's as great as 2001, but it is a very impressive piece of film making, and without doubt the best film I've seen this year--heck, maybe the best film I've seen in a couple years.

Co-written, produced, and directed by Alfonso Cuaron, GRAVITY is about a disaster that befalls the crew of a space shuttle mission. Sandra Bullock plays a scientist who is more doctor than astronaut, and George Clooney is the experienced old space hand. They're the only two people we see during the entire film, and their battle to survive takes up the film's running time.

By now it's very hard for me to be impressed by a movie's special effects. So many films now are nothing but super CGI pseudo-spectaculars, and they all have a "been there, done that" mentality. What makes GRAVITY different is that there is a sense of realism and vastness to the visuals. It's not just stuff flying at you--although there is a lot of that in this picture. The cinematography, art direction, and production design combine with the effects work to give the film an elegant magnificence. You really feel that you are in outer space. In GRAVITY outer space isn't just a background to the plot, it sort of becomes a major character on it's own.

The visuals here are simply astounding--a feast for the eyes. There are many times where Cuaron wisely lets the viewer just watch and take in what's being shown--a rare thing in this era of ADD-style movie editing. That's something else that I appreciated about GRAVITY--there's a quietness to many of the film's scenes. Cuaron doesn't just hit you upside the head every five minutes. Make no mistake, this is a suspenseful, edge-of-your-seat story, but unlike most modern directors Cuaron isn't shaking the camera as many times as possible, or making a cut every 0.02 seconds. Some of the best moments in the film are when there is no physical action, or very little sound.

And here's another really great (and surprising) thing about GRAVITY....it's only 90 minutes long! Can you remember the last time you've gone to your local googleplex and seen a major mainstream release that didn't have a running time of two and a half hours? Was it 1985?

I'm sure that some might think a 90 minute movie with only two actors and a slight storyline would be boring, but I assure you it isn't. Sandra Bullock is lurched into one life-threatening crisis after another, and the viewer is with her all the way, without any of the typical "distractions" of 21st Century cinema. There's no comic relief, there's no boyfriend on earth waiting on the outcome, and there's no Hollywood-style regular people sitting at a bar watching the emergency unfold on TV. There's not even a coda at the end of the film. When the credits started rolling the audience I was with just kind of sat there, as if they were expecting more...and as if they didn't really believe the film was over. I guess the general film goer is now conditioned to anticipate 15 false climaxes.

I'm amazed that Alfonso Cuaron was able to make this film the way he did. (I have a feeling that if an American director tried it, he or she would be sent on a long trip to Rewrite City.) GRAVITY is a true movie going experience--you have to see this on a big screen. It's a technological stunner, but thanks to fine work by Sandra Bullock and George Clooney, it has a moving element of humanity as well. Definitely the best film of 2013.