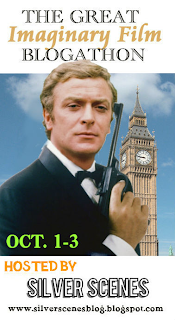 The Great Imaginary Film Blogathon is an absolutely magnificent idea. Every film buff in the world has always wanted to "create" their own classic film using on-screen and off-screen talent from the past.

Being the monster movie geek that I am, I decided to bring together Hammer Films, the masters of British Gothic horror, and Japan's Toho Studios, the leading makers of kaiju (giant monster) cinema. For those who might want to nit-pick over the "facts" of my epic, all I can say is that this is an alternate universe, and I'm J. J. Abrams. But I'm not going to blow up Vulcan--I'm going to present to you 1966's GODZILLA VS. ENGLAND.

THE SYNOPSIS
All over the world, unusual (and unexplained) weather patterns are befuddling scientists. Strange jet streams and currents are causing fish and animals normally found in the Pacific Ocean to wind up all the way in the North Atlantic.
RAF officers Roger Thompson (Peter Cushing) and Stephen "Steve" Moseby (Christopher Lee) are assigned to a joint Anglo/French task force studying the bizarre weather patterns on the southern coast of England. Accompanying the group is spunky reporter Donna Mitchell (Barbara Shelley), much to Roger's dismay--Donna and Roger have had an on-again, off-again relationship for a number of years.
Soon reports begin arriving of numerous ships being sunk off the coasts of Wales and Ireland. Roger and Steve fly a number of missions in the area, but see nothing of interest. Late one foggy night, on the coast of Southern England, a drunken fisherman (Michael Ripper) is startled by the sight of....the mighty Godzilla!!
Roger, Steve, and their devil-may-care RAF pilot buddy, Ken Dodge (Francis Matthews), fly to the sighting to find it's true--Godzilla is in the area. The King of Monsters heads to where the Thames meets the North Sea. Huge barriers are erected there, and the RAF sends up everything it has--but Godzilla breaks through and heads for London. Ken dies during the spectacular battle, and Roger has to break the news to Ken's wife Carol (Suzan Farmer). The Japanese government sends over the leading kaiju specialist, Dr. Suzuki (Akira Takarada). With him is another scientist, his attractive sister Mieko (Kumi Mizuno). Roger and Steve meet with the Suzukis to try and formulate a plan. Steve becomes instantly smitten with Mieko. Meanwhile, Godzilla attacks London with full force. At the British military command center, located in the bunkers used by Churchill during WWII, Dr. Suzuki informs Roger and Steve's commanding officer, Colonel Ellsworth (Andre Morell), that because Godzilla is in unfamiliar surroundings, his actions will be unpredictable. The British military decide to try and drive Godzilla back into the English Channel. Godzilla does go to the Channel, but London is in ruins. A European "Anti-Godzilla Defence Committee" is formed. During it's first meeting there is a debate on whether or not to use the dreaded Oxygen Destroyer in the Channel. The British Prime Minister (Charles Lloyd Pack) is against this, fearing an environmental disaster. The Spanish representative (Marne Maitland) argues that England should realize that Godzilla is a threat to all of Europe, and must be stopped at all cost.
Soon Godzilla reaches the narrowest point of the Channel. Artillery and planes from the coasts of both England and France bombard the creature. Roger and Steve both decide to suit up and take part in the battle, despite the protests of both Donna and Mieko. At the heaviest point of the attack, Godzilla suddenly dives underneath the surface of the Channel. After a 48-hour period without any sign of the beast, it appears that England is safe...but can mankind truly be safe from the vengeance of Godzilla?

PRODUCTION NOTES
Hammer Films Chairman James Carreras was always on the lookout for a great movie idea, and for extra funding from outside companies. In 1965 Hammer executives began discussions with Japan's Toho Studios for a co-production featuring Toho's most famous "star", Godzilla.
The details were hashed out, and it was decided that the Godzilla scenes would be filmed in Japan, and the non-special effects scenes filmed in England. As soon as news broke about a Hammer/Toho team-up, several American studios offered to be involved as well. Universal won the right to join in.
All three studios agreed that Hammer's main stars, Peter Cushing and Christopher Lee, had to be part of the production. One would think that Cushing & Lee would have been offended at being in a giant monster film, but the two were ecstatic--they both got to play contemporary, "normal" characters (British military heroes, no less), and they both got to have a screen romance. Knowing how important they were to the movie, Cushing & Lee demanded above the title billing, and a bit more money than their usual Hammer paycheck. Universal, Hammer, and Toho reluctantly agreed.
Filming began in early 1966. The Japanese crew and the British crew worked at the same time. For the British scenes Hammer hired director Don Chaffey, who had dealt with special effects before on movies such as JASON AND THE ARGONAUTS and ONE MILLION YEARS B. C. Toho's FX master, Eiji Tsuburaya, created spectacular miniature sets of London and the English coastline.
For the most part, filming went smoothly. Hammer and Toho had certain differences on the making of movie--Toho had already begun to make Godzilla to be somewhat of a "good guy", and Hammer wanted the King of Monsters to be as furious as possible. The ambiguous ending--the idea of Toho's main screenwriter, Shinichi Sekizawa--was to keep Godzilla "active" for future Toho kaiju films.

OFFICIAL RELEASE AND PUBLIC RESPONSE
GODZILLA VS. ENGLAND was first released during the 1966 holiday season. A huge ad campaign was mounted by Universal, and Peter Cushing and Christopher Lee were flown over to Japan for a major publicity blitz. Cushing & Lee toured Toho Studios, and posed for several pictures with the actual Godzilla suit used in the film (these photos still appear in monster movie magazines to this very day). GODZILLA VS. ENGLAND got very little critical response, other than the mention of the Hammer/Toho team-up. The movie made a decent amount of money, but it did not become the huge blockbuster that Universal, Hammer, and Toho were expecting. Three studios being involved meant three studios sharing the profits, with the result that all members of the triumvirate felt disappointed with the final financial result. Hammer was also none too happy with the Toho version of GODZILLA VS. ENGLAND (even though Toho had a contractual right to prepare their own Japanese cut of the film). Toho's version was longer, with more scenes featuring Akira Takarada and Kumi Mizuno, and the Godzilla scenes were edited differently. Toho also replaced James Bernard's score with one by Akira Ifukube (the rare Ifukube soundtrack can fetch up to $500 on Ebay). These factors, among others, caused Hammer and Toho to never work together again.

THE LEGACY OF THE FILM
Most kaiju fans have always held GODZILLA VS. ENGLAND in high regard. Godzilla's attack on London and the final battle in the English Channel are considered some of the best FX work Eiji Tsuburaya ever did. Hammer fans have seen the film as an interesting attempt by the company to branch out. Cushing & Lee admirers appreciate that GODZILLA VS. ENGLAND gave the dynamic duo a chance to play "regular" characters.
For many years, due to rights issues, the only available version of GODZILLA VS. ENGLAND was the English/American version. It was released on home video a number of times, but it wasn't until 2011 that the ultimate edition of the film came out on Blu-ray. The Criterion Collection's Blu-ray of GODZILLA VS. ENGLAND featured for the very first time the English and Japanese versions in a two disc set. Among the extras was a 60 minute documentary covering the making of the film, with appearances by genre film historians Jonathan Rigby, Tim Lucas, and Christopher Gullo. New interviews with Francis Matthews, Barbara Shelley, Akira Takarada, and Kumi Mizuno were included, along with two audio commentaries--one for the English version by Bruce Hallenbeck, and one for the Japanese version by David Kalat. 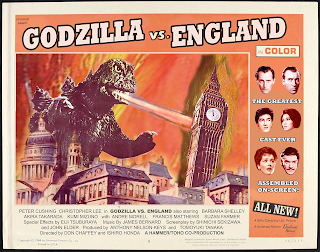